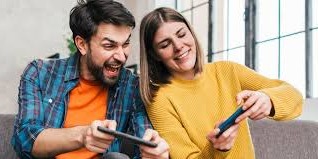 Mobile devices really are a lifesaver. They now fulfill the functions of a dozen appliances performed in the past, from phones to calendars to alarms to who knows what. It’s of little surprise then, to hear that you can also use them to improve your romantic relationships.

Mobile games can do a great job of making couples closer. Whether they promote cooperation or adversarial play, they always end with you knowing a little more about your loved one. But which games are worth playing? Here are 7 funky mobile games for couples.

If you don’t care for reading about each game, there’s a table at the bottom listing what you need to know. Even if you did take the time to go through the list, you should check out the table since it has info regarding developers and platforms (like iOS and Android phone).

Are you fans of Star Trek? Then this game will be right up your alley. Spaceteam is a free-to-play multiplayer game that takes you into deep space as you do your best to survive impending doom. Just make sure you play it somewhere you can be loud. Because there will be shouting.

The premise of the game is seemingly simple. Your spaceship is a hair away from destruction, and it’s your duty to save it and yourself. You and your other half have a control panel each. The goal is to perform the commands that appear on your screens. These range from ridiculous pseudo-technical jargon (Frog blast the vent core!) to cheeky satirical jabs (File taxes!).

Things get interesting when you realize you don’t always have the control panel required to perform the current command. The result of that is a lot of shouting, uproarious laughter, and a genuine sense of urgency. It’s weird, it’s hilarious, it’s a great game for Sci-Fi enthusiasts, so if that’s your thing, go play it!

Alternatively, if sports are more your kind of fun (more precisely, American football), then give Touchdowners a try. Just be warned: it’s not really what you expect. Instead of playing a traditional, real-world game of football, you’ll engage in a struggle to control the hapless athletes as they bounce about more than the ball.

One could describe the gameplay in a single sentence. You control football players and try to score a touchdown, but all of your players move in the same direction at the same time. Simple, right? Wrong. Your players constantly twirl their arms like windmills and flop around like fish on land.

All of that makes it a skillful endeavor to actually reach the opponent’s endzone. Both hysterical and demanding, the game will undoubtedly provide an unending source of laughter for couples.

On a very different note, why not download Bounden? Lovers of dance will surely get a kick out of navigating their way through this release. It’s a uniquely creative real-time dancing game with lovely graphics and an elegant twist.

Both players use the same device, grabbing each of its sides with one hand. When the game starts, you’ll hear soothing classical ballet music. The goal is to control a sprite through a predetermined route by moving the device. Doing so will soon result in both players twirling like dancers or knotting themselves up like a game of Twister gone afoul.

Bounden is great for the physically expressive among you who love to move. This game is a wonderful way to kill time, entertain yourselves, and get more intimate with your significant other. And you might even learn a smooth move or two in the process.

DUAL!, a bizarre Space Invaders/Pong blend, takes the concept of phone shooters to an entirely novel level. It sports a really retro style reminiscent of those old arcade games. Nevertheless, fans of shooters will find it fascinating and addictive, especially if they still hold a torch for that nostalgic aesthetic.

The way you play it is rather peculiar: both players must stand facing each other at a short distance. You move your device to maneuver with your little spaceship (we presume that’s what they are). The objective is to shoot at the other ship on the other screen. It all takes place in real time and actually kind of boggles the mind when you first see it in action.

This game is splendidly innovative, simple, charming, and a genuinely interesting new experience couples can enjoy. What more could one possibly ask for in a game?

If all these bizarre games fail to appeal to you, perhaps you would prefer something a little more conventional. Maybe something that doesn’t press you to complete its levels as quickly as possible? Something laid-back? If so, that’s where Words With Friends 2, the word puzzle game, comes into play.

In case you’re wondering what this game is about, you already know how to play it if you’ve ever participated in a game of Scrabble. So you need to come up with as many words from a given number of letters as possible. Handing in long words is a plus, of course. However, WWF2 is more lenient than Scrabble when it comes to incorrect words. Furthermore, there is no limit to the amount of time a turn lasts, leaving you to contemplate your next move as much as you please.

Couples who prefer a calm, pressure-free evening of gaming and a chill time will probably adore this popular game. If you count yourselves in that kind, download it and enjoy!

When was the last time, if ever, that you played red hands? You know, the game where you and someone else slap each other’s hands? Odds are it has been quite a while. Maybe you want to relive those old times but without the pain and inevitable fight when you smack your loved one too hard? Well, as the modern saying goes, there’s an app for that.

Red Hands is a delightful game that plays as simply as the real-life version. Both players select one of many goofy arms. Then, you both take the same device by its ends. One player taps to attack, while the other taps to dodge. A successful slap earns the attacker a point, and whoever accumulates 10 points wins. That’s everything there is to the gameplay, and you’ll hardly need more.

It’s difficult to imagine that such a bare-bones premise for a game could provide so much fun to a couple. But indeed, it does. And it definitely beats actually slapping each other. If you disagree, maybe finding fun mobile games for couples shouldn’t be a priority for you.

Let’s cap off this list with a bang! The music’s on, and everyone’s showing off their moves. What about you two though? If you find yourselves out of moves to dazzle (or at least, amuse) with, Dance Party will come in handy.

The game unfolds as follows. You hand someone your phone. The game then gives you moves that you have to replicate. It tracks what you’re doing with motion-sensing technology. Finally, it scores your performance which you can compare to the next dancer. You can even compete with people from around the world to see who can cut the meanest rug!

Whenever you’re feeling like shaking yourselves up, Dance Party will be your DJ. Those who love to move it simply have to try this game!

If you’re looking for lightning-fast info, then this is where you want to be. This is a table of the best mobile games for couples we talked about above.